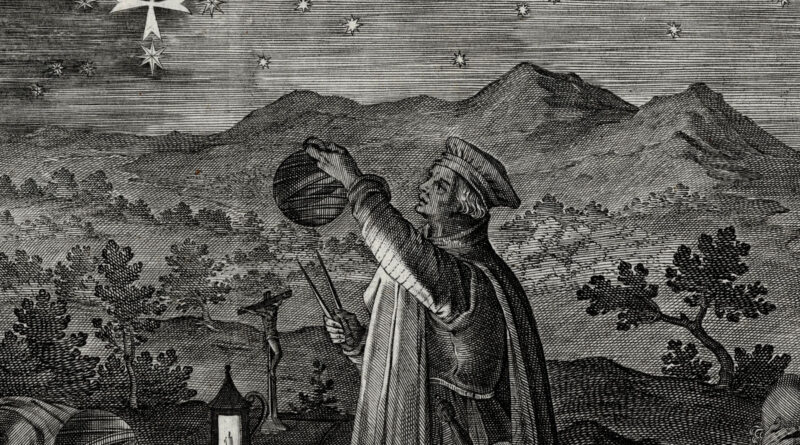 This rare and striking original renaissance period engraving shows Amerigo Vespucci finding the Crux or Southern Cross constellation with an astrolabe during his 1499 voyage, an event described in his Letter to Lorenzo di Pierfrancesco de’ Medici.  The engraving includes Vespucci’s own allusion to a relevant passage in Dante’s Purgatorio which helped convince him to keep searching for the Southern Cross. 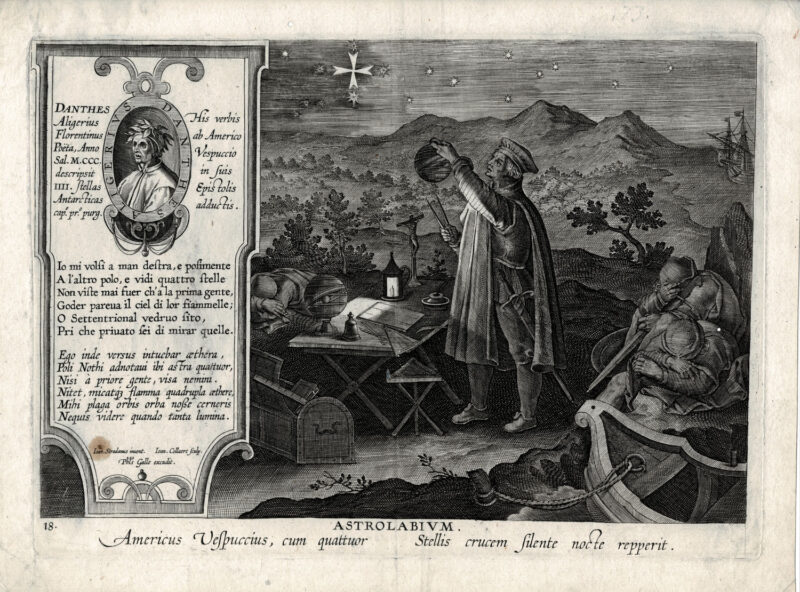 Jan van der Straet’s series of prints in Nova Reperta (New Inventions of Modern Times) published between 1580 and 1600 depicts the great discoveries and inventions of the renaissance age.

Jan van der Straet was a versitile Flemish artist active mainly in 16th-century Florence, Italy who worked in many media in a mannerist style.  He produced paintings and frescos, designed and prints and decorated pottery.  He became a prominent court artist to the Medicis and also produced large altarpieces for several churches in Florence.

Amerigo Vespucci (9 March 1451 – 22 February 1512) was a Florentine merchant, explorer, and navigator.  America was named in his honor.

Vespucci is repeatedly depicted in Stradanus’ famous work Nova Reperta – in this scene he is shown searching the heavens with an astrolabe.  The astrolabe was the essential instrument for accurate measurement of latitude in celestial navigation.

Vespucci wrote in a letter to  Lorenzo di Pierfrancesco de’ Medici that he had tried but failed to find a fixed star in the southern sky that could be used for navigation. He wrote: “Even though I had worked so many nights and with so many tools – the quadrant and the astrolabe – I could not identify a star that had less than ten degrees of motion around the sky . That is why I did not name any of them the austral pole, because of the large movement they all made around the firmament; that is why I did not name any of them the austral pole made around the firmament” . But then Vespucci remembered a passage Dante, and thanks to the passage that is quoted in the margins of this print, he was able to make out the Southern Cross: “And continuing this work, I remembered some lines Divine Comedy, of our poet Dante, mentioned in the first chapter on the Purgatory, when he imagines leaving this hemisphere and wanting to describe the Antarctic pole on the other:
I turned right, and well in front of the southern pole, I saw the four stars never again seen since the very first people. The sky was full of their brightness: You northern widower are not allowed to see such stars!”