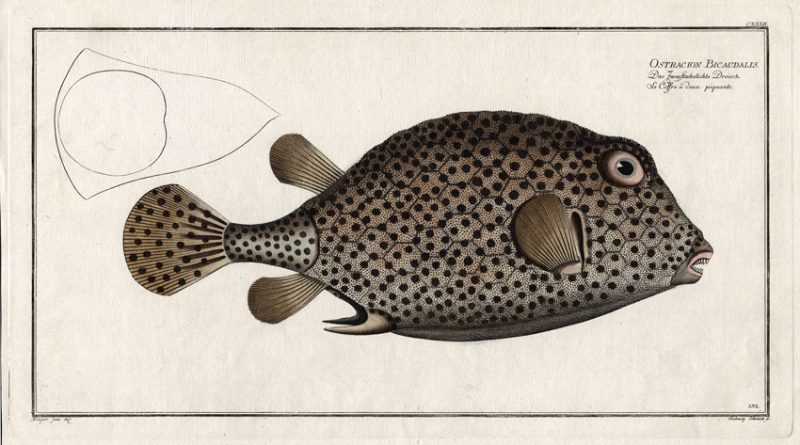 Elegant Antique engraving of a Spotted Trunkfish, a species found along reefs in the Caribbean and south eastern Atlantic.  The trunkfish secretes a toxin from glands on its skin that is toxic to predators if ingested. Born in 1723 into an impoverished Jewish family, he received hardly any education in childhood, but had a natural scientific curiosity and eventually studied medicine and moved to Berlin.  He went on to become one of the one of the most important ichthyologists of his time.  He was the first to name and describe many of the species featured in the book and it remains an important reference even today.

His richly illustrated primary work, Allgemeine Natur-geschichte der Fische (The General Natural History of Fish) also known according to the short form of its French title as Ichthyologie, is generally considered one of the most beautiful books on fishes ever published.  The illustrations were done by multiple different artists and engravers and many of the plates were heightened with silver and gold or with Gum arabic to give the fishes’ scales an authentic shine.