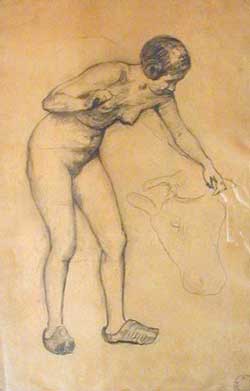 The Swiss-Italian artist Luigi Chialiva is best known for his charming scenes of peasant life and domestic animals. According to the Benezit, Chialiva was a multi-faceted man who trained as an architect and a chemist, and developed a special technique for fixing the pigments in pastels. He was a friend of Edgar Degas, who he met during a stay in Rome, and also associated with the artists Jacques Tissot, and Pierre-George Jeanniot.

The narrator of the book “Boy Travelers in Central Europe” (1889) describes a visit to the artist’s studio in Ecouen, a town north of Paris. He writes that Chialiva, “has lived in America* and has an American wife.

“Mr Chialiva’s studio is such a curious one that I must stop right here to describe it as well as I can: “All of this gentleman’s pictures contain horses, sheep, geese, cattle, pigeons, or other domestic animals, and he has his studio arranged so that he can have his models before him. It is like a great conservatory, but it hasn’t any flowers and the other things peculiar to a conservatory. At one end there is a space separated by glass from the rest, and in the part beyond the glass he has his animals that he is painting into his pictures. Sheep, cattle, horses feel perfectly at home there, as they are always kindly treated. The wife of his peasant farmer acts as his assistant when he wants any of the animals or birds kept in position for him, and they are so accustomed to her that they do almost anything she wishes. She holds the geese, turkeys or pigeons for him, and they recognise that she will not hurt them; they run to her when she calls, and some of them almost act as though they knew they were being used as models for the artist and it is necessary for them to keep very quiet.

It is interesting to note how the panes of the glass in this image mirror the blocks which the artists often used in constructing his paintings, as with the young shepherd at left. It is possible these panes served as the basis for the grid. Steel plate Engraving of Luigi Chialiva working in his studio in Ecouen, France
The artist kept animals in a special observing room behind a glass window adjacent to his studio and worked from life through this window.

Study of a Young Shepherd
Click for additional images * We have not been able to find any additional confirmation that Chialiva spent time in the U.S. – the Benezit refers to a stay in England. ]]> ]]>Village Antiques Gift Ideas – Hobbies, Interests,