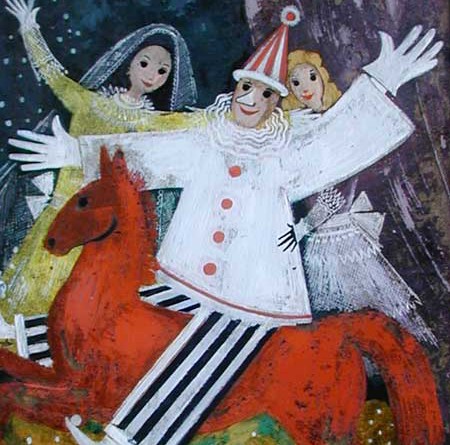 Ernst Graupner was born in the small city of Ingolstadt, north of Munich. After a short time working as a journalist, he left that career to enroll in the Akademie der Bildenden Kuenste in Munich where he studied with Herman Kaspar and Juilus Hess.

During the difficult period of WWII Graupner became fascinated by the works of the Blue Rider (Blaue Reiter), Kandinsky and Paul Klee, but works by these artists were at the time supressed by the Nazi regime and difficult to see.

After the war, Graupner established himself as a freelance artist in Munich, together with his wife the Swiss artist Annemarie Graupner (ne Baumgartner). Annemarie, who created collages and assemblages using textiles.  His wife was the niece of the Swiss watercolorist Christian Baumgartner.

Graupner also worked with his brother Hans, a skilled artist and craftsman who in addition to drawing, printmaking and painting also designed jewelery, clocks, candlesticks and other objects.

The artist’s son believes that this painting was most likely executed sometime between 1945 and 1950.

This marvelous piece is a “reverse painting on glass” painted by the artist on a reverse side sheet of glass. In this unique style of art — which has a long tradition in Europe and Asia and parts of Africa — the entire process of the painting must be done in reverse and as a mirror image. The painting will eventually be viewed from the unpainted side of the glass.

Therefore the artist must work a very different fashion than traditional methods used paper or canvas. In this image, for example, the eyes would have to be painted first (rather than last as in traditional painting) and then the flesh colors of the head painted behind the eyes.

Paintings on glass are particularly clear, detailed and vibrant. Please note that the full detail and clarity of this work of art are not captured by the photos on the website. In Switzerland this technique was often used during the 19th Century for religious paintings, particularly images of the virgin.

In this work by Graupner, this century old technique has been used to charming effect by a modern German artist who was influenced by the Blaue Reiter expressionist school in Munich.

Graupner said that he practiced reverse painting as a kind of antidote to the time-bound work of oil on canvas.

Describing his method of painting, he wrote:

“In my reverse glass painting I use the so called eglomise technique, a process in which the finest details (hair, lace, hands) are scratched out of the colorfield with a needle or a little knife and then the intended color is deposited there. This technique was used in Western Bohemia in the 18th and 19th Centuries.”*

Note: In French, reverse glass painting is known as “peinture sous verre” and the paintings themselves can be refered to as “Sous Verres.”

In German, this technique is known as “hinterglasmalerei.” Hinterglas means “behind the glass” and malerei is the Geman word for painting.

* From the Catalogue: “Annemarie, Ernst, Hans, Quirin GRAUPNER” edited by Stefan Graupner (the son of Annemarie and Ernst) and published in Germany in 2002 in conjunction with a traveling exhibit of works by the artist’s family.