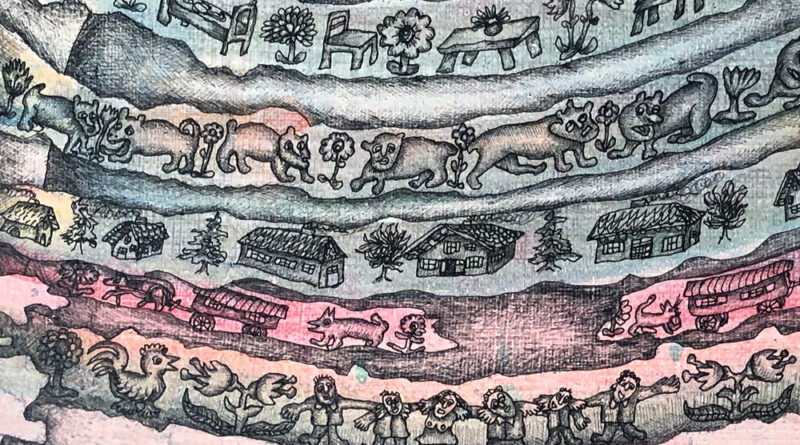 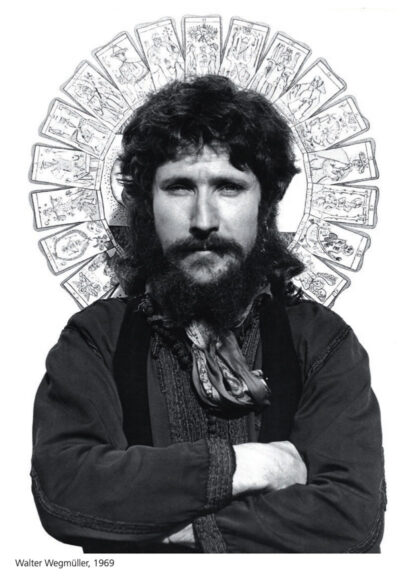 The Swiss artist Walter Wegmueller grew up on a farm near Bern as a “Verdingkind*” These were foster children forcibly removed from  parents care because they were orphans, impoverished or belonged to a group such as the Jenish travelling people, as was the case with Wegmueller’s mother.*  It was a difficult childhood, but the local customs, relationship to animals and nature and the folklore he absorbed on the farm in his youth enriched the symbolism of Wegmueller’s work as an artist throughout his life.

Wegmueller studied in Basel, Bern, Paris and London, and began his artistic career in Bern and was a cofounder of the Kunstfests der velausten Voegel (“Art Festival of the Lousy Birds”) and of the artist’s group Farnsburggruppe.  Not just a painter and sculptor, Wegmueller engaged across a wide spectrum of the arts including film and music.  Among other collaborations, Wegmueller worked and exhibited with H.R. Giger (the artist responsible for the visual design of the film Alien).

Interested in mysticism, and inspired by exploration of his Roma and traveller roots, Wegmueller found his most widespread fame in the design of several unique sets of Tarot cards.  His friend Timothy Leary helped arrange for Wegmüller to album on the theme of tarot which was released in 1973, with an elaborate package that included a set of Wegmüller’s cards. Wegmüller recites stories about each of the tarot cards on the album, which also contains lengthy instrumental passages.

An activist politically, he co-founded an umbrella organization for Swiss Jenisch and Roma, the Radgenossenshaft der Landstrasse.